Skip to content
You are here
Home > Which type of Hive?

Which hive shall I use?

This is where new beekeepers can get mightily confused, eventually make up their minds which type of hive they’re going to use but then end up with something completely different because they’ve either bought some no-longer-needed colonies from a retiring beekeeper or have got a good deal via either online or in-person auction.

Cedar is probably the most common material for hives but polystyrene are also available for most styles, some beekeepers make their own using marine ply, which is very heavy, or softwood.

Almost all hives come with open mesh (OM) floors that were originally introduced to help monitor varroa mite infestations. These floors come with a plastic insert for measuring/counting mite drops. Trays or inserts shouldn’t be left in situ because they can fill with hive debris that the bees can’t access to clean up, and can either lead to a wax moth infestation or develop a thick layer of mould.

Whichever type of hive you choose please site it carefully, perhaps putting an empty hive on your preferred spot for a week or two before adding bees. Moving hives within a garden isn’t easy.

Check out our advice for selecting the best spot for your apiary.

Check out the sales, when some large beekeeping suppliers offer ‘seconds’ equipment that can save you a small fortune. Some will post sale orders, others won’t. Maybe car share if you have to collect.

Don’t be shy of buying second hand equipment from beekeepers who are either downsizing or giving up beekeeping, but check it out first to make sure there’s no rot or excessive waxmoth damage.

Look out for local association’s auctions, where you can pick up some real bargains. There are two within our reach – one in April at Pulborough, RH20 1DL, another in May at Meon Valley, SO32 3NP. There’s another in Gloucester each year.

Be cautious of very cheap imported hives, which may not have been made of well-seasoned timber. Shrinkage can provide a number of entrances and exits for the bees, not always where the beekeeper would expect them to be.

Beeswax foundation isn’t cheap, the best is even less cheap. This wax will be the foundation for your colony’s nest and where they will store honey that you’ll later harvest and eat, so buy the very best you can afford – your bees deserve it. Reject any foundation that is discoloured, dark brown, or that doesn’t smell fresh.

In this part of the country you’re unlikely, for example, to find a Smith hive because they’re more popular in Scotland. All the rest you will see or hear about during your earliest days of beekeeping.

Rarely, if ever, used by today’s beekeepers as a permanent nest for their bees, skeps were superseded by a wide range of framed hives which allow beekeepers to check their colonies welfare without damaging precious comb.

Made of straw, reeds, or sometimes willow, skeps are usually hand made by the beekeeper. They can have an upper layer (super), accessed through a hole in the top of the lower skep, which the bees can use for storing honey when the colony is at its largest.

Skeps are sometimes used for collecting swarms, because they’re light and easy to handle when up a ladder.

Designed and regulated by British Standard registered in 1946 and then 1986, now withdrawn. The “National” hive is the most commonly used in UK and, because it’s a fairly small brood box, suits non-prolific bees i.e. those that will not develop into large colonies.

Available in both cedar and polystyrene from UK suppliers.

Because bees in this part of Hampshire tend to be quite prolific, some members of South West Hampshire Beekeepers use “double brood” National (two brood boxes for the brood nest) whilst others use “brood and a half” (brood box plus super for the brood nest). Both these arrangements mean checking as many as 24 frames each time a newer beekeeper carries out a colony inspection.

Standard National frames have long lugs which can be easier to grip and lift, but can snap at the joint with the side bars if handled too roughly. DN5 (Deep National 5) frames are self-spacing and recommended for brood.

The same footprint as the BS National but a deeper box that takes 14×12 frames. The top bars have long lugs. Some beekeepers find these frames quite unwieldy because they are deeper than they are wide and seem to take for ever to lift out of the hive. Other beekeepers think they’re brilliant.

BS Nationals can be converted to 14×12 using a suitable eke.

The largest of the National boxes at 16×10, and suitable for prolific colonies. These hives take frames with short lugs.

BS National brood boxes can be converted to take Commercial frames by using a Hamilton Converter.

This hive has the initials of its inventor, William Broughton Carr c.1880, UK

A double-skinned hive, sometimes painted white, that’s often seen in paintings of rural scenes. Some would say it’s the traditional British hive, but that would actually be a skep.

The construction, with an air gap between the outer ‘lifts’ and the inner hive, means it’s well insulated

The inner hive will usually be either BS National or 14×12. Check the size before buying.

The most common hive type in the world, developed in America by Lorenzo Langstroth and patented in 1852. Modern Langstroths have their own variants and sometimes equipment from one supplier will not fit that of a different supplier, but this problem is more common in USA than here in UK.

Originally developed by Draper in Illinois, these hives are deeper than the standard Langstroth and use short lugged frames that are almost the same size as Dadant brood frames.

They were popularised in Hampshire by Captain Treadwell when he was Chief Bee Inspector – he felt they were the perfect box for bees in this area.

The biggest hive you’re likely to see, it takes 11 Dadant frames has enough space for the biggest and most prolific colonies.

A variation, the Buckfast Dadant, was developed by Brother Adam. These take 12 Dadant frames rather than the more normal 11 to accommodate the huge colonies he preferred. These hives are rarely seen.

Sometimes called Long Deep Hives, often with two entrances because the boxes are large enough to take two mature colonies. Can contain any sized frame if home made.

A trough hive developed by Roger Dartington. It takes 14×12 National frames and has half supers that each take 6 frames. Originally designed to be made of marine ply, so it’s heavy but need never be moved. Suitable for beekeepers who find it hard to bend to inspect their colonies. 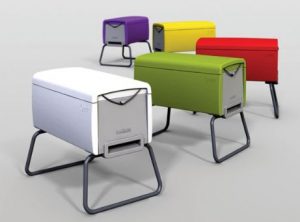 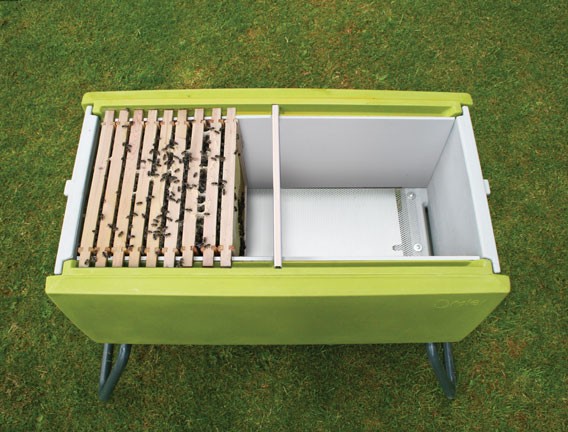 Made of twin walled plastic and in a variety of colours this is a commercially produced version of the Dartington, made by Omlet.

A trough hive, often home-made using pine or marine play, that uses strips of wood to provide a top bar from which bees suspend the comb. Best used by more experienced beekeepers who can (should) recognise when comb is too soft to be self-supporting during an inspection.