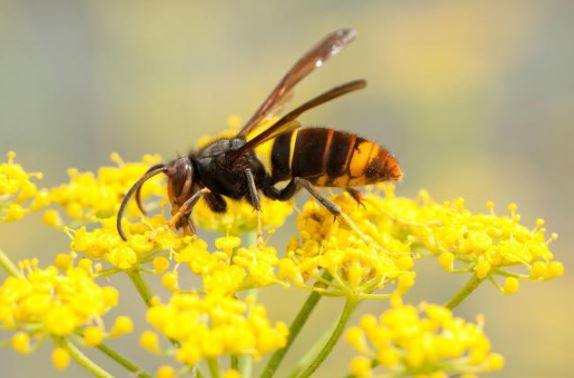 Christine Coulsting and Terry Mullarney from Romsey Beekeepers were welcomed to this month’s meeting at which Christine gave a most enlightening presentation on the current developments of the Asian Hornet incursion into the UK, followed by Terry running a workshop at which members made their own Asian Hornet traps ready for next season.

As we will all be aware from recent press coverage, the Asian Hornet is a non-native species that is starting to get a foothold in the UK and from which our native honeybees have got no defence. This could ultimately lead (as it has in southern France) to the decimation of our honeybee colonies and other pollinating insects with the resulting detrimental effect on crops etc.

This subject is especially pertinent in this area given the recent destruction of two Asian Hornet nests just over the county border in Highcliffe and the sighting of an Asian Hornet queen in New Milton earlier this year. All Beekeepers and the public are asked to help out by being vigilant and reporting any sighting by email to alertnonnative@ceh.ac.uk or use the iPhone and Android app Asian Hornet Watch. Information should include location, date and number of Asian hornets, plus a photo if possible. Alternatively, the club has its own Asian Hornet hotline which can be reached on 07561 147193.