Special traps designed to capture Asian Hornet queens as they emerge from hibernation to set up new colonies are to be deployed in the island next spring.

Beekeeper and JEP nature correspondent Bob Tompkins, who has been at the forefront of this year’s containment efforts, says the Island is turning to France on how to control the local population explosion, which he predicts could produce more than 300 nests in 2019.

He said: ‘The plan is to go along the lines of what has been happening in France. We are going to put out special traps aimed at trapping the queens as they emerge from their winter hibernation to look for food so they can build their nests.

‘The French have discovered that queens start to emerge when the air temperature rises to be consistently above 13°C for five days so we shall be monitoring those signs in the spring.’

The Asian hornet poses a serious threat to the environment and farming as it preys on honey bees and other pollinating insects, which are essential to food production. One hornet can kill up to 50 bees in a single day and each nest can be home to 200 queens and up to 6,000 worker hornets.

This year (2018) 57 nests have been found in the Island. The areas with the highest concentration of nests are from Samarès in St Clement, through Five Oaks to Trinity Church, and from Waterworks Valley to St Mary’s School.

The Asian hornet arrived in Europe, at the French port of Marseilles, in 2004 in a consignment of flower pots from China and is now prevalent throughout France, northern Spain and Portugal. The species is also spreading through Italy, Germany and Belgium.

The species first arrived in Jersey in 2016.

‘We met officers from Environment two weeks ago to look at what had been achieved this year and how we could function better as a group, for which better co-ordination is key,’ Mr Tompkins said.

‘The department is going to look at employing a part-time co-ordinator from April to October next year. We also looked at what equipment, such as special protective suits and walkie talkies, we could benefit from so Environment can increase the amount and quality of support.’

This year experts from Exeter University, which is spearheading the UK’s efforts to combat the invasive insect, spent two weeks in Jersey trialling how to radio-track hornets back to the nest. 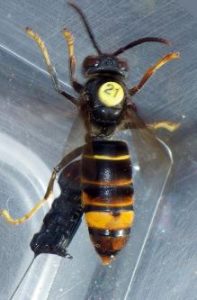 In addition the number of local Asian hornet-hunters working daily to destroy nests, doubled as they were joined by volunteers from the English West Country eager to learn tracking techniques.