Skip to content
You are here
Home > News > Asian Hornets in Gosport – The story unfolds….. 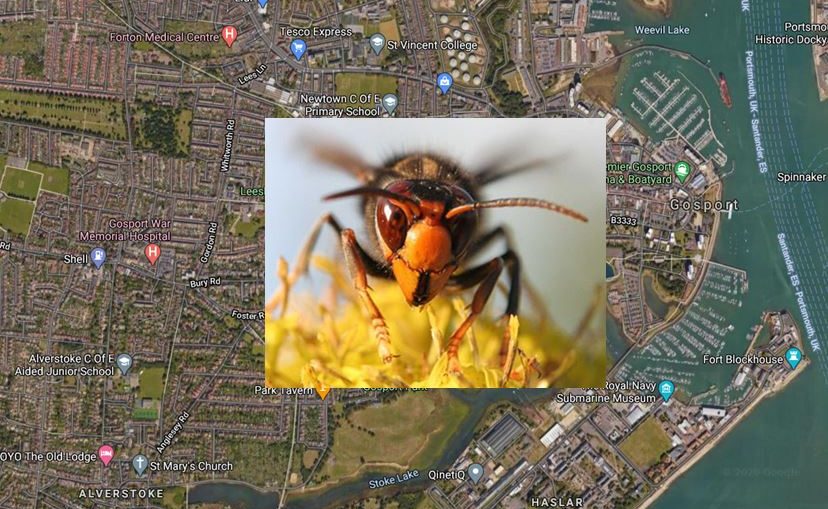 The following is a first-hand account of the recent Asian Hornet activity experienced in Gosport written by the gentleman who actually spotted and reported the insect.

”  … Instead of allowing ever-increasing bird and insect attacks on my white grapes to bully me into an early harvest, I decided to regularly pluck off the damaged fruit, and wait until the remainder achieved perfect mellow sweetness. Unfortunately, in early September, my efforts came to the attention of a large striped beastie, which ascended from a bunch like a helicopter to look me in the eye. Although darker and much larger than a common wasp, it had a similar build and brought to mind a sign I’d once spotted in Japan stating, ‘Beware Killer Bees!’

As I retreated, the insect turned and headed off at speed. It was soon back, scooping out grape innards. So, I armed myself with a phone and lay in wait. Once I’d captured a reasonable image, a little Googling confirmed the intruder was an Asian hornet which should be reported to the National Bee Unit.

The next morning, as my wife and I were preparing our house for prospective buyers, I jokingly said this would be the moment the ‘hornet inspector’ would arrive. Several minutes later, the phone rang. It was the head bee man, who was within minutes of reaching us after rushing down from Norfolk.

We put him off — but not for long. Come mid-afternoon, a full investigation team in shorts and uniform sweatshirts, armed with compasses, bait and walkie-talkies, had assembled ready to track down the invaders.

By agreement, our precise location was kept secret from the national press, amusingly being reported as ‘a vineyard, north of Gosport’. A quick NBU inspection revealed our garden was particularly welcoming to hornets. Apart from the succulent grapes, we also have honey bees squatting in a chimney, and ample ivy the aliens find difficult to resist.

Members of the team were sent off to investigate nearby bee colonies the predators might be interested in decimating. Sure enough, hornets were spotted at hives nearby.

They were also discovered decapitating prey at the naval institute, where, unfortunately, two of the beeteam were apprehended by human security whilst peering through the perimeter fence with binoculars.

The tracking involved capturing hornets in butterfly nets, marking them with ink, and then timing their subsequent appearances. All of which can take its toll. A female NBU operative who’d named her white-dotted worker ‘blanche’ was reminded not to become too familiar with the pests she’d been sent to exterminate.

Hornet feeding points were set up and staked out to record turn-around time, and direction of departure. In a scene reminiscent of the Battle of Britain, these movements were triangulated at field HQ to pinpoint the likely location of the nest.

Watching all this, I noticed that, unlike wasps, Asian hornets could be solitary feeders who didn’t necessarily invite their chums to gorge on food sources they’d discovered. Also, although they were known to eat all sorts of smaller insects, they didn’t bother munching through the substantial numbers of dozy grape juice-intoxicated wasps gorging on my vines.

Over several days, the bee-team slowly closed in on the hornets’ secondary nest, which was eventually located high in an apple tree a short way up the road. At dusk, the hazard-suited hit-squad moved to apply poison, after which the nest was taken away for DNA and other analyses.

As yet, the primary nest has not been found.”