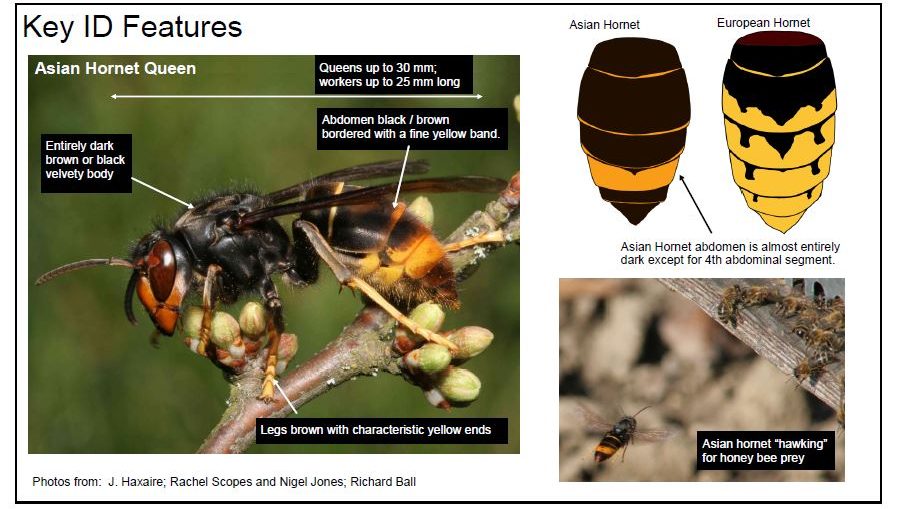 The British Beekeepers Association (BBKA) is holding it’s second Asian Hornet Week Sept 9 to 15th and is warning beekeepers and the public “I could be coming your way – are you ready?” Copyright: John Feltwell

Since 2016 there have been a total of 15 confirmed sightings of the Asian hornet in England and six nests have been destroyed.

Beekeepers on these teams have familiarised themselves with the features of this foreign pest and how to track it back to its nest.

An Asian hornet sighting was confirmed in the Tamworth area of Staffordshire in early September (and the nest subsequently destroyed). This was the second report this year, the first being in July in New Milton, Hampshire.

In each case, the hornets were spotted and reported by a member of the public.

Anne Rowberry, (the BBKA’S Asian hornet coordinator) said: “ We are asking everyone to be vigilant in looking out for this alien species, the Asian Hornet, Vespa velutina . It could decimate our pollinators, including our honey bees, it is important to have everyone actively looking for it. It’s not just a beekeeping problem! Now is the time for trapping and spending a little more time watching to see if hornets are hawking the hives in your apiary, put an hour aside to watch each day for hornets during Asian Hornet week and remember to look for them on late sources of nectar like ivy.”

The risk of an active Asian hornet nest being found in the UK is negligible during the colder winter months, but higher during the summer and autumn. As the leaves fall from the trees you may be able to spot a disused nest.

Asian hornets have already been spotted this year in countries close to the UK (France and Jersey) and a risk remains of accidentally transporting an Asian hornet when returning to the UK from abroad.

It is crucial that any possible sightings are reported so experts can take quick and effective action to eradicate Asian hornets.

The email to send photos and reports to is: alertnonnative@ceh.ac.uk