Skip to content
You are here
Home > Blog > Moving Bumble Bees – an experience not to be forgotten! 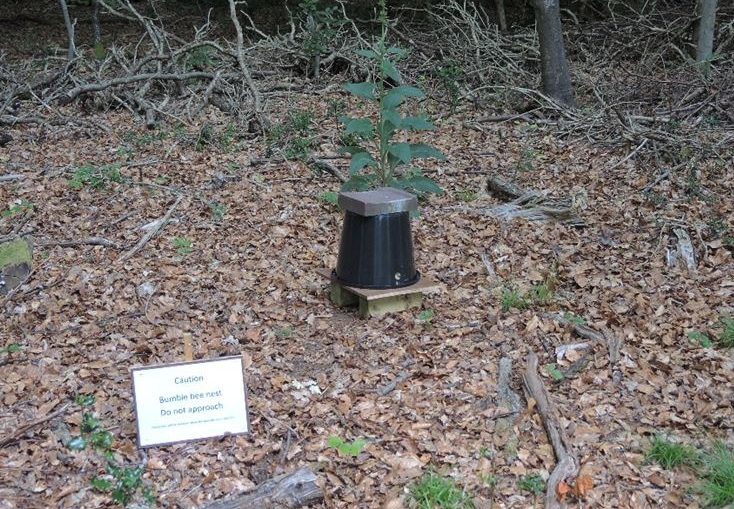 A friend called me about a nest of bumble bees in an outbuilding he was about to renovate. He did not want to kill the bees if it could be avoided. In my ignorance I volunteered to come and have a look.

The bees were going in and out of a hole where many years ago a pipe had come through the outer wall. It was a double skin wood construction, but the outer wood was pretty well rotten to the point of crumbling. The fibreglass insulation had sagged and the glue holding the fibre strands was gone, so it looked like a pile of loose fluff on the sole plate. This is where the bumble bees had made their nest. The glass fibres did not seem to affect them and they were quite happy where they were.

The renovation clearly required the bees to be moved so I said I’d try.

I had read somewhere that bumblebees stop flying after dark and that they cannot see red light. Both are not true, though I did not know that at the time. It was only a week ago, so it did not get “dark” until about 9:30 PM which is when It started peeling of the outer cladding. It was a good thing I was wearing my bee suit. Out they came, straight at me and the red light. The red light meant I could not see clearly, but the bees did not seem to have any problem.

I scooped as much of the glass fibre that I thought contained the nest into a cardboard box. It was a novel sight to see bees suddenly appear out of a wad of yellow glass fibre. There did not seem to be tunnels through the stuff, they just popped out all over the place, and headed straight for my face.

Several time-outs to let the bees settle down a bit were followed me trying to scoop another handful of bees into the cardboard box. This turned out to be as easy as herding cats. As soon as put one lot in, the others came out – straight for my face. They were not aggressive in the way that honey bees can be (I have some experience of that), but they are big, and buzz loudly when it is just in front of your face. Quite a few were crawling over the veil, but not with the impression they were desperate to sting me though I did not give them the opportunity to do so.

Eventually I shut the box with a number of bees inside, made an opening of about 3 cm diameter and sealed up the lid. That was left in a dark shed and me hoping the bees would play along and all happily move into the new cardboard residence. I should have known better. 3 days later they seemed to have moved back into more glass fibre in the wall cavity. It was obvious I had to not only get as many into a box, but then move it some distance away, rather than leave it close to the original home. Honey bees should be moved 3 feet or 3 miles, it seems the same applied to bumblebees. This time their new home would have to be out in the forest somewhere, not in a weatherproof shed. The new home could not be cardboard, so I decided to buy a black builders bucket (black to keep out as much light as possible, pink and yellow were available, but I though it probably not to their taste). I removed the handles and made an entrance hole near the top. When inverted this would be not only waterproof, but dark and of the right size.

I returned with my bucket and a plywood floor and travel screen. If I had the bumblebees tightly sealed up whilst in the car they might overheat or asphyxiate, hence the mesh travel screen. The bees and fibreglass were persuaded into the bucket, the carboard box was secured and I drove home. As soon as I was home I poured the contents of the cardboard box into the bucket and inverted it over the floor. The bees in the carboard box had mad a reasonable nest in the 3 days, it was about 10 cm diameter in the middle of the glass wool, nice and warm no doubt.

The next day I was glad to see bumble bees returning from forage amongst the foxgloves that now surround their new home. A tap on the bucket got a loud buzz response, so they’re all in there.

This autumn when the colony has died and the new queen have gone off somewhere to hibernate I will recover the bucket and clean it out, though I am tempted to leave it as a bait hive for the next generation.

Whilst on a walk on the Yorkshire moors I had noticed an upside-down black bucket being used by honeybees as a hive. They seemed perfectly warm and content, even though it was cold and windy outside.

My advice on responding to a request to move bumblebees: best avoided. Tree bumblebees that have occupied a bird box are easily moved – take the whole birdbox and relocate it. For a nest in the ground I suggest you persuade the landlord “owner” to leave the bees as they are, they will die off by August / September and the nest will not be re-used. I very much doubt digging out a nest has any chance of success. My bees in the wall experience was easier than a nest in the ground, but bumblebees do not follow the same rules as honeybees. For one thing I kept talking about “the queen” and how the bees would no doubt follow her, as honey bees do. I think I saw at least 4 bumble bees queen flying around the nest. They were huge and at least double the size of the workers, and they did not meekly follow the queen(s) as I had hoped. At no time were the bumblebees aggressive, despite my clumsy attempts to persuade them into various containers. I’m happy to have apparently saved a colony of bumblebees, but it was not as easy as catching a honeybee swarm.