Skip to content
You are here
Home > Blog > Bumbledown Bees – Chapter 2 – Just when you thought it was safe to go into the garden……. 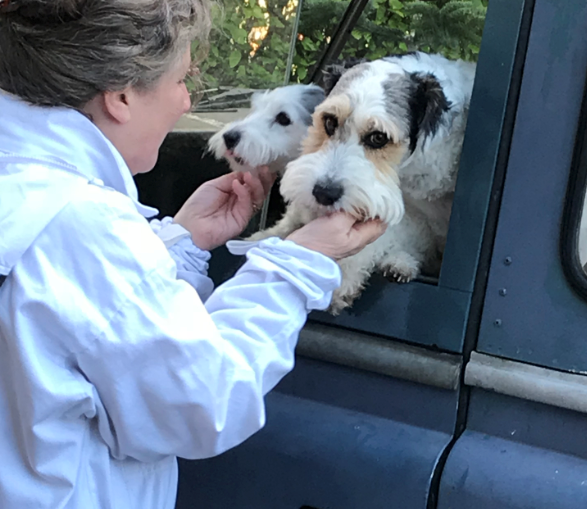 I hope you all had a smashing Christmas and I wish you all a very happy New Year.

Part of being a beekeeper involves having a “puffer” (aka a Smoker), they come in various shapes and sizes and all start off really shinny and make that lovely “puffing” sound when you smoke the bees to encourage them to go down into the hive. I could not wait to get mine, it was one of the things I had looked forward to purchasing together with my gloves and bee brush.

Pleased with my new pieces of equipment I was excited to show them off to Mr Bee Bob. There I was all dressed up, bee suit on (droopy crotch included see chapter 1) hood up, gloves on, and a large packet of matches, how hard could it be to light my puffer?

Mr Bee Bob shook his head and kindly made me aware that I was likely to ignite myself as well as the smoker as I was wearing my hood whilst playing with matches, which is dangerous as the mesh on the hood is flammable. (Don’t do it folks, not a good move, can you imagine the explanation in the Casualty Department!) In addition, with the material I had used in the puffer, I was at risk of kippering my little darlings as I was using scrunched up paper which had a plastic coating and would be fatal to them!!!! (Not killing your bees whilst smoking them is preferable) Eventually we got smoking and all was well no bees died and I did not sustain any burns.

A few weeks later Steve appeared, to help me with my bees (Steve and Mr Bee Bob are taking it in turn to mentor me). I explained that I had been struggling to get my “puffer” smoking (Mr Bee Bob made it look so easy). Steve asked to see how I got it going. So there I was (again) hood removed, gloves off, following Mr Bee Bob’s instructions (doing it safely) and still the matches wouldn’t catch (‘L’ Plates glowing at this point as well as my cheeks with frustration!) Steve shook his head (I have noticed that beekeepers (especially mentors) do shake their heads a lot) “I can sort that” said Steve. There and then he pulled out his own “puffer” a far more superior specimen than mine together with a cigarette lighter (more impressive than my Cook’s matches) and to cap it all a whopping great blow torch. With a deft strike of the lighter the blow torch erupted like a flame thrower and set his smoker going with ease. Impressive was not the word and that was how Steve became “Smoking Steve” purely on the size and power of his smoking equipment.

That week the male members of the family also learnt the benefits of not smelling nice. My bees kept making a beeline for my husband and son, it was a pure attack. Even just stepping out the back door they would attract the bees from the other end of the garden with the result of the boys leaping around the flower beds as if they were auditioning for Strictly Come Dancing, I on the other hand was left alone.

Chatting to Mr Bee Bob he suggested that the boys try not wearing deodorant or after shave. Thus no nice smells in our household during the hot summer months and do you know it worked, the bees stopped behaving as if they were on a major bombing raid. (For the lady beekeepers out there I would like to mention that my Channel No 5 did not cause problems). The dogs suffered also, with them being stung for mooching too closely to the hive. Both learnt quickly to avoid that area of the garden. The dogs now have a healthy respect for all things flying.

I finally thought I was turning a positive corner. I was getting used to the bee suit and equipment, (not looking completely awkward and cack handed); the family were not getting stung, (well maybe the odd one or two) my mentors were not shaking their heads as much and my bees were happy and friendly to me. Each evening I would pop up the garden after work and give them an update on the day.

All was well. I was actually feeling confident, and then it happened: On opening my hive one day there were seven queen cups AND NO QUEEN! I looked, I searched, I looked again. Her Majesty was not in residence, the flag was not flying; indeed the only things flying were rather grumpy bees. That opening of the hive was the first and only time I have been stung and it jolly well hurt. I could sense the bees were upset. I put a call in to Mr Bee Bob and Smoking Steve, we decided to try and spilt the hive to give a couple of the Queen Cups a chance with some brood, food and nursing bees in another hive…… I might then have two hives rather than one. I was heartbroken that my Queen had gone. Was I that bad a beekeeper?

Sadly splitting the hive at the end of the summer did not work. The main hive however was back to being happy, there was a new Queen and I met her just after she hatched.

I learnt in those few weeks that health and safety in beekeeping is important, and that all beekeepers do the same thing in many different ways.

Next time I have a story to tell about getting all stuck up in more ways than one, visiting beekeeping chums and the Queen’s night of passion!